Pears are my favorite fall fruit and partner deliciously with cinnamon spiced vanilla rum. On cool fall evenings I love to sip on a hot apple cider cocktail and this one may be my new favorite. A cinnamon pear simple syrup is what every fall cocktail needs.

Serve this Vanilla Pear Cider warm with a cinnamon sugar rim and a smokey burning cinnamon stick for effect. I mean cocktails are supposed to be fun right?!!

Blue Chair Bay Rum offers authentic Caribbean Vanilla Rum made with sugarcane molasses and natural ingredients. Its aroma of sweet and creamy sun-baked vanilla meringue leads to a rich spiced and vanilla natural flavors. It adds a wonderful flavor to the pear and apple notes.

How to Garnish Your Cocktail Glass

Place ¼ cup of sugar and 1 teaspoon of cinnamon in a shallow bowl stir together with a fork. Take a small lemon or orange wedge and gently fold it slightly over the rim of the glass. Wipe the rim with a light coating of juice. Keep the cinnamon sugar in the same bowl or place in a small rimmed plate. Turn the glass rim side down into the sugar and twist until coated.

Take a bosc pear and slice down the center next to the stem on both sided. I prefer to garnish with a stem so its easy to place and remove. Then, taking the sharp knife cut a small slit from the middle base of the slice halfway up to the middle of the pear. Gently pull slit apart and slide pear onto glass.

Why a burning cinnamon stick you ask? Well, it gives a spooky effect, smells nice and you can stir your cider with it! Just grab a ling cinnamon stick and light the end with a lighter for a small flame and gentle smoke string. 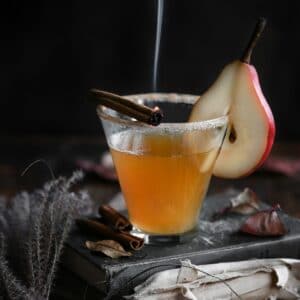 Feel free to adjust amounts of cider and soda water to your taste.
did you make this recipe?Mention @twocupsflour or tag #twocupsflour!
« Pear Crisp
Apple Cranberry Stuffing »
Get the Brunch Pro Theme