So excited to share these spring inspired apple cupcakes made with chunks of fresh apples, lemon and ginger. A moist cupcake topped with apple frosting so there’s apple flavor in every bite. Because you should eat apples all year long!

This Recipe is Sponsored by Starr Ranch Growers and JUICI Apples. All thoughts and text are my own. Thank you for supporting the companies that help make Two Cups Flour possible.

For a spring cupcake I decided to change the common apple cake additives of fall spices and lots of brown sugar. I wanted to make a lighter flavor profile for warm weather parties. Lemon and ginger are one of my favorite combos, which add just enough zing to fresh apples. The cream cheese in the frosting creates a softer texture that pairs so nicely with the moist cake base.

To create this recipe I partnered with Starr Ranch Growers to showcase their delicious JUICI apple. A softer skin apple that still maintains a great crunch that makes it versatile for all types of baking or cooking. JUICI apples are a gorgeous marbled red color and offer a flavor note similar to the honey crisp apple. No need to peel these beauties, the skin not only tastes great, but breaks down just enough to make them easy to chew.

Based in Washington, Starr Ranch Growers, is a group of multi-generational farming families who raise premium, wholesome conventional and organic fruit. As the exclusive grower for this modern apple variety, I am so honored to have the opportunity to test them in a bunch of new tasty bakes.

How to Store Cupcakes

Like most everything I prefer to eat my desserts within the first two days of making them for the best flavor and texture. Frosted and unfrosted cupcakes can be stored at room temperature for 5-7 days. Refrigerating them can cause a more dense texture to the cake crumb. 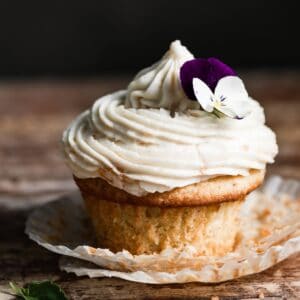 did you make this recipe?Mention @twocupsflour or tag #twocupsflour!
« Apple Chutney Bruschetta
Edible Flower Cookies »
Get the Brunch Pro Theme