Homemade pop tarts are one of my favorite things to make. To put it simply, they’re little breakfast pies and you know how I feel about pie. My favorite pop tarts as a kid were the frosted brown sugar cinnamon. Warm or cold I could always find a reason to enjoy them.

Now that I’m an adult, I still enjoy frosted pop tarts, but prefer to make my own version. As in, my recipe for flakey all butter pie dough filled with fall apple pie filling and topped with a cinnamon vanilla glaze.

For these cinnamon apple pop tarts, I partnered with Starr Ranch Growers to showcase their delicious Honeycrisp apples. Based in Washington, Starr Ranch Growers, is a group of multi-generational farming families who raise premium, wholesome conventional and organic fruit.

The Honeycrisp apple is perfect for fall baking. The crisp texture, sweetness and hints of honey are all the characteristics that make it my favorite apple.

Layers of flaky pie dough are undeniably better when made from scratch. The dough is quick to bring together, wrap and store in the fridge until you’re ready to bake.

Cinnamon, nutmeg and cloves make up the flavor profile for the apple filling. Your kitchen will definitely smell like fall while you’re cooking sown the apples.

I’ve used granulated sugar in the apple pie filling then sprinkled brown sugar on the pastry before spooning on the apples.

Now let’s get to making these pop tarts from scratch!!

I suggest making the pop tart dough the night before you plan to bake. Pie dough needs time to rest, 30 minutes is the least amount of time I would refrigerate my dough before using it.

If you refrigerate the dough over night, let it sit on the counter for about 30 minutes to soften before rolling out.

Use a wooden ruler to measure while you’re cutting out the pop tarts. I like to use a pastry cutter, pizza cutter or a small sharp knife for clean edges.

The apple pie filling can also be made the night before for easy assembly the next morning. Just make sure its cool before spooning onto your cold pastry.

How to Store Homemade Pop Tarts

Store your homemade apple cinnamon pop tarts in an airtight container at room temperature for up to 3 days or in the refrigerator for 6 days. To reheat them, bake in a 350 F (180 C) oven for 10 minutes. Serve warm with fresh glaze! 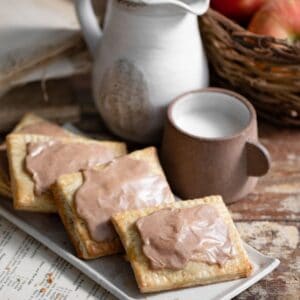 did you make this recipe?Mention @twocupsflour or tag #twocupsflour!
« September Food Review
Baking 101 : Types of Sugar for Baking »
Get the Brunch Pro Theme